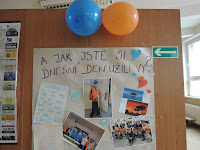 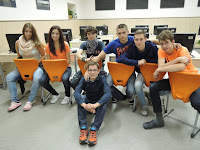 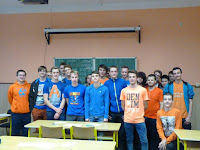 Our trip to England 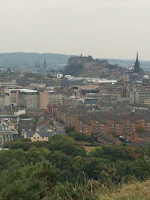 First day of our journey we started at Central Station in Prague. We went by bus all night to Brussels. In Brussels we were early in the morning. We went by subway to the centre of Brussels. Brussels is a very modern city but it has very nice monuments too. We saw the square Grand-Palace, Manneken-Pis, Atom of Iron and Mini Europe.

In the evening we moved to France and we went to hotel where we stayed. In the morning we should have gone through tunnel, but then we went by ferry. 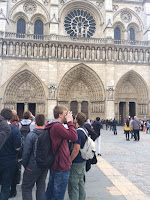 In the morning we arrived in London. In London there are lot of monuments and most of them we visited like Piccadilly circus, London eye, Oxford street and next. Third day we were in Edinburgh. Edinburgh is a historical city with strong atmosphere of Scotland. This place was the most beautiful of the eight days. We saw Edinburgh castle, Main Street and Arthur´s saddle. In the evening we accommodated in hostel in centre of Edinburgh.

Next day we went to Stirling castle and city. It is very similar to Edinburgh. Fifth day of our journey we went back to la Mancha and tunnel. All day we spent in bus. Only place which we saw was York and York cathedral. After we went through the tunnel we slept again in France like at second day. Next day we visited Paris. Paris is the most beautiful city that I have ever seen. There are lot of historical monument, houses and parks. Notre-dame is amazing and Eiffel tower was cherry of our journey. In the evening we went back to Prague through Germany. 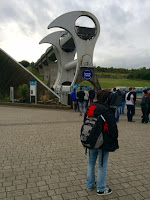 We departed from Prague’s Central Station. About 3 hours later we arrived to border to Rozvadov. It was starting to get dark and I quickly fell asleep.

Day 2
I woke up early in the morning in Bruxelles. We were transported by underground to citie’s downtown. We saw European parliament and famous square Grand-Place or the Cathedral of St.Michael and St. Gudula. Bruxelles is more administrating city, so there wasn’t so much sights. Our last visit was The Atomium, giant molecule of iron where you could go up and have a view all over the city. 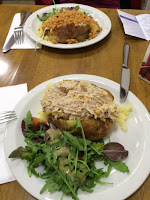 We then left Bruxelles for Calais. We passed through beautiful city of Oostende, which is located literally near the sea. We arrived in Calais at about 7 p.m. We took our luggage to our rooms and then we bought some food in the supermarket just behind the corner. I went to bed early, because I was very tired.

Day 3
We woke up very early in the morning, because there was long way ahead us. We should have taken a train which would took us to Folkestone, but there were complications, so we took ferry. We lost some time, but it was great experience for me. We arrived in Folkestone and then we quickly left for London. I have to say it was very strange to see changed sides of the road.

In London, we saw many of its famous sights including Big Ben, Buckingham Palace or London Eye. But I rated the visit of Arsenal Stadium the highest. It was an amazing place. But I was kind of sad, because we got over it very fast and there wasn’t much time to investigate sights further. We spent all day in London and I think I liked it most there. It was different than in the Czech Republic and people were very kind. At 10 p.m. we left London and we were on the way to Edinburgh. 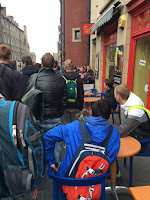 On the way to Edinburgh we saw The Ruins of Hadrian’s Wall. But saw. It was late night. I saw just one meter some wall. We arrived in Edinburgh in the morning. We visited the Edinburgh Castle, which is the most famous Scottish sight. Tickets were expensive, but it was great. We got to beds late and we had new plans for next morning.

Day 5
We got up and then we left Edinburgh for Stirling, another old Scottish beautiful city with castle. In the past, the famous William Wallace defeated here the British army. We left in the afternoon for Falkirk where we saw the Falkirk Wheel, which is a giant device using Archimedes‘ Law to lift boats. We then returned to Edinburgh and we went to sleep.

Day 6
We left Edinburgh for Calais, which have taken us all day. We visited York and Cambridge.  We arrived at Calais late night and then we went to sleep after long  journey by bus.


We departed from Calais to Paris. We saw Eiffel’s Tower, some of us even bought tickets all the way to the top. There was a great view. I’d never seen anything like this before. We saw the famous “Notre Damme” and „Invalidovna“ where is the tomb of Napoleon Bonaparte. At night we finally decided to return home passing Germany. 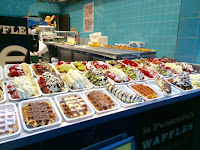 Our trip began at Prague main railway station (Prague hl.n). There, after all student gathered, we got on couch. Our first stop was in Rozvadov, where we could be some food or go on WC – that was our last stop in Czech Rep. for some time. Next stop was at some German gas station, the same scenario as in Rozvadov. Then, I fall asleep. 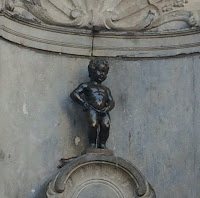 When I woke up, I realised, that we must be close to Brussels – and it was true. When we arrived to Brussels, it was like 5 AM. First, we went by underground to centre of Brussels and there we went sightseeing. We saw lot of interesting places like, EU plaza, Mini-Europe or Atomium. In the evening, we got on our coach and headed to Calais. In Calais, we slept in formula hotel. 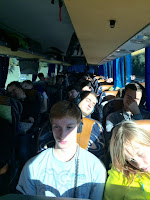 In the morning, we left Calais and headed to Euro Tunnel. Unfortunately, some refugees decided to take a walk-trip in it so we had to go by ferry. We arrived to Dover and then drove all the way to London. We stayed there until evening and we have seen many amazing places like Big Ben, London Eye and plenty of cathedrals. Some of us went to Arsenal stadium on excursion. It was nice place, but we had to move on – to Scotland.

Day 4 – Sunday
We finally arrived to Edinburg and went to large castle in the centre of the town. There was a nice view on Edinburg. After visiting castle, we have time to walk through the town freely. Later that day we went on hill near by the town with, again, nice view on town from different angle. In the evening, we arrived to our hotel. 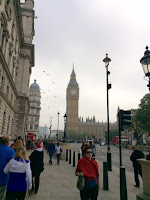 Another day and we are headed to Stirling. Similar but smaller town with large castle. There were some nice expositions in it and you could see the Wallace Monument from the walls of castle. Then, we went to Loch Lomond but it was raining so we didn’t stay for long. On the way back to Edinburg, we have seen a huge boat lift in Falkirk. In the evening, we finally got back to our hotel.

Day 6 – Tuesday
Leaving Scotland, we headed to York, where we visited local cathedral. Then, we had some time to see some other places in town or buy food. Then, we left York and drove towards Cambridge – however we didn’t stop there. In evening, we arrived to Euro Tunnel. No refugees wandering inside today, so we boarded pretty easily. At 11 PM, we arrived to hotel in Calais.

Day 7 – Wednesday
Trip from Calais to Paris. We got there before noon, so we had plenty of time to visit and see places like Eiffel’s Tower, bridges of Seine or Les Invalides. I have to say that view from Eiffel’s tower was amazing, especially at night. From the Eiffel’s tower we went on short boat trip on Seine, which was cool too. Then, we got on our coach and headed back to Prague.


We arrived it the Czech Republic  pretty quickly through Germany and Amberg. Also, we had again a short stop in Rozvadov. We were back where we started – Prague’s main railway station. 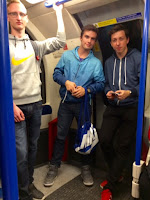 First day we were leaving Prague by bus and travelling to the Belgium. It was a long journey. We travelled during night. It was very uncomfortable in bus.

We got to Brussels Second day in the morning. We got off the bus and travel by underground to the centre of Brussels. We visited most important sights like European parliament or peeing boy. In the evening we travelled to Calais. We slept in small hotel. 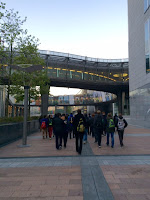 Third day we should went to England by Eurotunnel, but refugees attack it so we had to travel by boat. It was very great experience. When we got to London we saw centre like Big Ben, Westminster abbey or London eye. London at night was very nice. In the evening we get in the bus and travel to Edinburgh.

We have travelled at night again Fourth day and it was very tiring too. We get to Edinburgh in the morning. We visited Edinburgh castle. Than we have free time so we saw Edinburgh centre. In the evening we got to hostel where we spent a night.

Next day in Edinburgh, day number 5 was great. We visited castle Stirling, mount from where we saw whole city and Lake Loch Lomon. We bought something for dinner and went back to hostel. We spent another night in Edinburgh.

Day Number 6 was travel day. We were whole day in bus. We have travelled through Cambridge to Folkestone, where we went to the Eurotunnel. Than we got to Calais and there we spent night.

Last day we travelled from early morning and we visited Paris. Paris is very gorgeous, we have seen Notre-Dame, Les Invalides etc. In the evening we saw Eiffel tower. At the end we attended sightseeing cruise on Seine. After that we got to the bus and came back to the Czech Republic through Germany, Amberg. 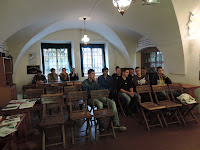 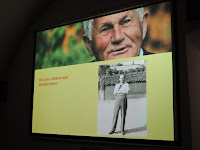 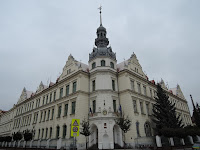 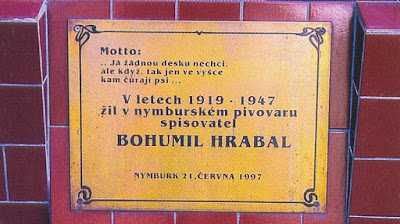